Added 7 months ago by MovieTrailers
107 Views
Check out this awesome trailer "Monsters of Man" - Directed by the talented Mark Toia - An action-packed, suspenseful sci-fi thriller that reveals the terrifying dangers of sophisticated AI robotics used for military applications when a corrupt CIA agent (Neal McDonough – Minority Report, Captain America, Netflix's 1922 and Altered Carbon) conspires with a robotics company to field test highly advanced prototype robots with the aim of winning a lucrative military contract. Their plan is to drop the robots into the infamous Golden Triangle to test their battle skills on unsuspecting armed drug cartels that no one will miss. The illegal mission is a disaster; haywire robots slaughter an entire village of innocent people. The brutal massacre is witnessed by a group of volunteer doctors on a goodwill mission. WATCH ON APPLE TV, iTunes, AMAZON, Google Play, Youtube movies, VIMEO ON DEMAND https://vimeo.com/ondemand/monstersofman

Everyone is considered collateral damage when you need to hide the truth.

In his spectacular directorial debut, Mark Toia delivers high-end storytelling, capturing incredible performances, with all aspects elevated by incredible visual effects. All within a nightmarish vision of how deadly mechanized AI can go horribly wrong! Audiences at the Sydney Science Fiction Film Festival gave the film the win with rapturous applause. The general consensus at the post-screening bash was… F***ing Awesome! INDIE FILM HUSTLE were so blown away, stating that “Monsters of Man is one of the best films they have seen in 2020. A must watch!”

Jose Rosete has over 300 credits to his name. Quentin Tarantino called his film “Lowlife” “a stroke of genius.” Other highlights include the AMC spin-off "The Walking Dead: Red Machete”, "Dead Bullet”, doing motion capture and voice for "Resident Evil: End of Zoe”.

We really hope you enjoy watching this video!
When you do, please hit the LIKE ✔️ SUB ✔️ SHARE ✔️ button as well as the bell symbol ???? so you'll be kept in the loop as new material is published on our channel!
▂▂▂▂▂▂▂▂▂▂▂▂▂▂▂▂▂▂▂▂▂▂▂

WANT TO GET FEATURED?
If you’re a CGI ARTIST, SCHOOL, ANIMATOR, FILMMAKER, or STUDIO and would like your project showcased on TheCGBros simply apply here ►https://www.thecgbros.com/getstarted/

TheCGBros have permission to broadcast this video. If you believe this video should not be broadcast on our channel, please contact legal@thecgbros.com. 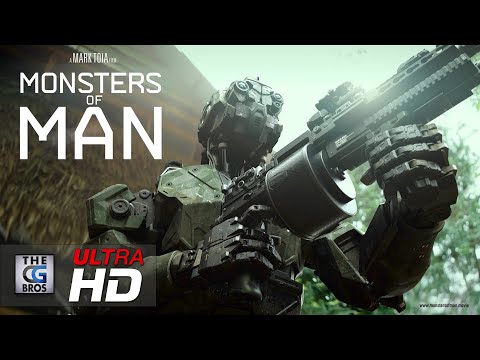 Check out this awesome trailer "Monsters of Man" - Directed by the talented Mark Toia - An action-packed, suspenseful sci-fi thriller that r...